Dave Heise (MD)
My first remembrance of any clock at all was in the early 1960s when I was about 10 years old. My dad was employed as a captain in the Baltimore City Fire Department in a station (Engine 19) that was known as the busiest in the city. The captain of the station is responsible for all aspects of its operation, and there came the day when a shiny new electric clock was delivered to replace the old 30-day windup that had graced the station since the 1920s. This new clock eliminated the need to wind a clock monthly and to keep it regulated. When dad returned home that evening, he carried with him the “old clunker that the firemen had put into the trash.”
That “old clunker,” a Seth Thomas 18-inch gallery clock with a no. 86T movement, was hung on the knotty pine clubroom wall above my dad’s desk and forgotten. It became part of the clubroom décor; never wound, but always seen.
Years passed and in early 1975 dad asked if I’d be interested in taking the clock. This, of course, was accompanied by his retelling the story of how the clock came to be in our home.
Once in my home, a cursory inspection revealed much exterior dust and a large swath of black tar on the underside, which had built up as my dad smoked at his desk. Not knowing anything at all about clocks, I wanted it “fixed,” and I sought out a local clock shop. My wife and I hauled the clock to the shop and, as we walked in we were met with expressions of astonishment; we were told that we had an amazing clock, a treasure!
As we watched, the screws holding the backboard to the case were removed, the clock was flipped, and the case lifted up.  The case was put aside and then the hands and face were removed to expose the movement, which I now realize is a gem.
After a quick inspection, Mr. Slama quoted a price to clean and lubricate the movement as well as have his partner, Mr. Bayrle, restore the dial.  The total came to $55 complete!
Then came the matter of the case: it was old oak, had good patina, and was in excellent shape except for the black tar on the underside. After some discussion, during which Mr. Slama learned that I had done some limited woodworking, he suggested that I take the case with me, and he proceeded to mentor me as to how to remove the tar ever so gently using lemon oil and 0000 steel wool. The idea was to remove the tar without cutting into the patina and certainly not into the finish—it would take a steady hand and an investment of my time, but I was up for the challenge.  I completed my task, oiled the entire case, cleaned the glass, and removed some rust from the hanger.
The day finally arrived when the movement and dial were completed and could be reunited with the case. I proudly carried my case into the shop and was given a passing grade for the job I had done. The case was put on the bench upside down, the backboard, with the movement and dial intact, was lowered and the screws were replaced.  When it was ready, Mr. Slama hung the clock on a hook that he had installed just for this day, rehung the pendulum, and set the beat.
We all stood back in awe, what a beauty she had become, rising from the trash heap!  Since then, the clock has kept time in the three homes in which we’ve lived and always in a place of prominence.
Whenever anyone views it for the first time, I retell the story of how it came to be in our home. 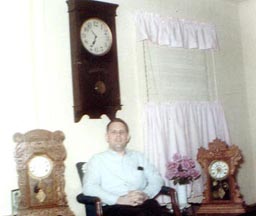 Billy B. Johnson sits among his fledgling clock collection in this 1967 photograph.

Billy B. Johnson (GA)
My interest in old clocks was peaked when I saw an Ingraham wall clock in the home of an older friend shortly before I was married.
My wife and I both liked antiques, so after our wedding we decided to purchase an old clock for our apartment. We knew that a friend of my wife’s parents had several old clocks, and we decided to approach her about selling one of them.
To our great surprise, she gave us a working kitchen clock. Her husband had recently passed away, and she was beginning to down size their antiques. Needless to say, we were jubilant about receiving this gift.
The little kitchen clock, which was made by The Sessions Clock Company, has kept time in our home for 43 years. Over the years it has followed us across the country, as I changed jobs or received a promotion that required relocation.
It was on duty, faithfully keeping time, when the children were born, as they grew up, and when they left home. It has seen our grandchildren arrive and our parents pass away. It has loyally kept time as I left the working world and entered into retirement.
My father refinished the case sometime in the 1970s and the movement was rebuilt in the 1990s. It is still on active duty in our home, inhaling seconds and exhaling minutes as the hours of our lives go by.
I now own many clocks and most of them are much more valuable than this old kitchen clock. Yet this little clock, which started it all, holds a special place in my heart. 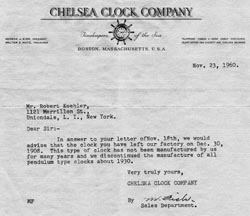 A New York Member
Back in 1959, early one morning while driving my car on my way to work, I passed a garbage can sitting on the curb. What looked like a clock was sticking out of the top of the can. I stopped the car and got out to take a look. The clock was not in great shape. It looked like the weight, which was still attached, had gone through the bottom. Pieces of the bottom were in the can. The glass in the top and bottom was, of course, broken, and the paper face was gone. The clock looked pretty pathetic sitting in the can. I gathered it up and went on to work. It looked like a good project for me. I ended up rebuilding it back to its original condition. I wrote to Chelsea Clock Company and asked for information regarding the clock (the serial number was still in the case). They told me that the clock left the factory on December 30, 1908, so my clock has had its 100th birthday. That’s what started my interest in clocks.