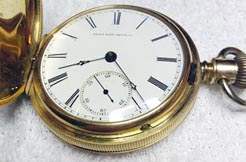 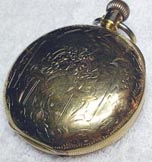 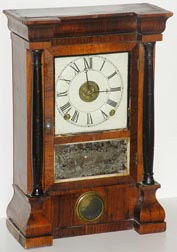 John Teeter (MI)
Back in 1967 I was interested in making pottery and especially interested in the formulation of glazes. I heard about a woman in a nearby town, Northville, Michigan, who taught the making of glazes, so I signed up for her class. She lived in a charming old house in the town’s National Historic District. When the other students and I were quietly working, I noticed the pleasant sound of a clock ticking. It intrigued me and I inquired about it. It turned out that the lady was also a genealogist and had found that one of her forebearers had been the clockmaker George Marsh, and the clock that I heard ticking was a George Marsh, 30-hour, column and splat. When I later related this to my wife, we thought that it might be nice to have an old clock in our home. A couple of weeks later, in a local antique shop, we saw a small Seth Thomas shelf clock that we liked and subsequently purchased. However, much to our disappointment, the clock refused to run.
When I returned for my next glazing lesson, I told the lady about our problem. She recommended that I take it to a neighbor who worked on clocks. His name was Mel Anderson, FNAWCC. I took the clock to him and he took me into his shop and let me watch while he lubricated it and set it in beat. Being a mechanical engineer, the mechanism intrigued me. Sensing my interest, Mel suggested that I join the NAWCC and offered to sponsor me, which was a requirement for membership 44 years ago, and I have been a member ever since.
My wife and I began attending meetings of our then local Chapter 6, in Detroit, MI. We enjoyed meeting and learning from these like-minded members. In ensuing years, we have met many fellow NAWCC members from across the country at regionals and national conventions. Through these horological contacts I learned clock repair and restoration techniques. After relocation to the west side of the state, we attended meetings of Chapter 101, Western Michigan. I went on to participate as chapter secretary and chapter president.
I developed a special interest in early American wood movement clocks, which led me to join the Cog Counters (now NAWCC Chapter 194) where I served as secretary/treasurer for several years. All of these associations led to the meeting of more and more friendly and interesting people. I have always been interested in the life and times of makers and am especially interested in researching the makers of the clocks that we are caring for.
What has become of our “First Clock” you ask? We have two daughters and we told them, that as part of their wedding present, they could have any clock from our collection of more than 80. Our oldest daughter selected the Seth Thomas. As we currently live relatively close to her and her husband, we get to visit it often, and it is pleasantly ticking away in their house. Happily, our grandchildren have also shown an interest in clocks and have examples from our collection, proving that interests, not only heirlooms, can be passed on.