Ronald Marr (NJ)
My first one was a Waterbury pressed-oak kitchen clock purchased in 1967 at Ellicott City, MD, for $28. It was also my first repair! In the mid-sixties you could purchase an all-original late-Victorian kitchen or shelf clock from clock dealers with a one-year guarantee for about $60. Being newly graduated from college, and newly married, $60 was a lot of money. When I saw this one with an original case, class, dial, pendulum, and Waterbury key, which ticked and ran for a couple of minutes, I bought it.
My father had started collecting clocks the preceding year, which sparked my wife’s and my interest. We were actually looking for a china clock, but they were $75 at a clock dealer, so we decided to start with this one. It was especially attractive to us because it was not the common golden-oak, but was walnut stained, which fit nicely with the then popular oiled walnut modern furniture that we were buying. I had an engineering degree, and was a model railroader used to dealing with small geared mechanisms, but otherwise knew nothing about clocks.
At home it would run five minutes and stop. I got my model tools, figured out how to take it apart, found a dirty mechanism, which I soaked in gasoline, dried in the sun, oiled with my wife’s sewing machine oil, and put back in the case. It ran—for a couple of hours! It took me two evenings of studying the mechanism to realize that the problem was on the strike side and was always at a fixed time interval. It turned out that the lantern pinion that meshed with the main wheel was bad. The pinion wires had notches worn in them, and for whatever reason, one had bent at the notch and failed to mesh properly. I could go on for hours explaining how I figured out to disassemble/reassemble the mechanism without any proper clock tools. Let’s just say it involved picture wire to tie the springs, match-marking every gear and pinion, several rubber bands, tweezers and matchsticks, and lots of colorful language. I had no pinion wire, so I used a nail of almost the correct diameter, which was hardened by heating and water quenching. The other pinion wires were turned so that the wear was inside, and reassembled with Loc-tite. I soldered the undersize pinion to hold it firmly.
I ran the clock every day for more than 15 years, then in rotation with the other clocks in my growing collection. Although it hadn’t been run since about 2005, it took off when I oiled it and is running now as I type. My experience with “number one” allowed me to make some good buys, including a nice $55 Ansonia china clock for my wife the next year!  Many years from now some clock repairman will look at this clock and exclaim: “Look at this! Can you believe what these crazy old-timers did?”

Wesley Grau (IL)
My grandfather passed away in the spring of 1973, when I was nine years old. His house had been left untouched since the death of my grandmother in 1959. The laundry room was in the basement, and there was a cabinet with drawers that she would empty the pockets out into. I started to collect coins from this pile of goods. My parents were avid antique collectors, so on the weekends we would be carted to local weekend flea markets and antique stores. This gave me an opportunity to pick up additional coins to fill in the blanks in my albums.
At one such show in 1978, my father pointed out an old coin silver pocket watch. Prior to this I didn’t pay much attention to watches, but when the proprietor wound it up and it came to life, I was instantly hooked. During my years in high school, I sold my coins and started buying pocket watches. I expanded my collection into high-grade railroad watches, and especially those by Ball Watch Co. I started working at a couple local jewelers who were watchmakers. One was a graduate of Elgin Watch College, and the other a graduate of Bradley Horological Department. With their help I successfully learned to service pocket watches, which helped me with my collecting. I was able to buy more running watches, restore them, and either keep them, trade them, or sell them at a profit to reinvest.
When it came time to graduate from high school, the farming economy was soft so my dad encouraged me to go to school and learn watchmaking formally. That way, no matter where I ended up career wise, I would always have something to fall back on. It was always my intention to return to farming as my family had done since the 1700s and before, and use horology as a winter hobby. Well, once I got started I enjoyed it so much, there was no other career choice for me. I have continued my training to this day, having been trained by many luxury watch companies in the United States and Europe.
Most of the watches I had accumulated unfortunately were sold or traded off for tools and equipment, but I still have the original key wind that started it all—an American Watch Co. P.S. Bartlett in an American Watch Co. coin silver hunting case, movement serial number 69930. 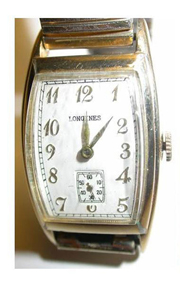 Robert H. Chapman (TN)
Some 70 years ago—in July 1942 to be exact—a few months before I turned 18 years of age I got my first job, which paid about $1 an hour. I was living with my blue-collar parents in Macon, GA, and as I recall there was either no rent or it was a small fraction of my weekly income. After four or five weeks, I had saved sufficient money to buy a modest watch, or, perhaps, the money was burning a hole in my pocket and needed to be spent to prevent injury to my body.
I had never owned a watch, knew nothing about wristwatches, and I do not know why I thought I needed one. My father wore a railroad watch (Hamilton 992), but I did not know anyone who wore a wristwatch. Be that as it may, I took my money and went to Kessler Jewelers, the most respected jewelry store in middle Georgia at that time, and bought a watch.
The polished copper presentation box, the original packaging box, and a very small leather- bound owner’s booklet are shown below.
The owner’s booklet contains a pocket that holds a folded guarantee certificate (about 4 inches square) that is referenced specifically to this watch by its serial number 6083905.
The watch has 17 jewels, is in good running order, and is in a Keystone 10K gold-filled case. Although Swiss made, it was timed and cased in the United States. The bracelet is not original.
The box top describes it as a Longines “75th Anniversary Watch.” The label on the box (shown above) identifies it as a Patrick Henry model and shows the price as $55. This cost if quoted in today’s dollars would be astounding.
The provenance of the watch is easily documented by significant events in my life. I was drafted into the Army about nine months after buying the watch (in April 1943). Some 19 months later (November 1944), I was in a staging area on an island in San Francisco Bay, on my way to the South Pacific Theatre of Operations. Because of the harsh climatic conditions, etc., in that area, we were advised, if we had a nice watch, to send it home for safekeeping. I took that advice and sent my watch to my mother to hold for the duration of my military service. I bought a simple Timex wristwatch from the PX that served me well until my discharge in January 1946, when I resumed wearing my Longines watch.
I continued wearing the Longines until April 1975, when I received a 25-Year Employee Anniversary gift of an Accutron 218 watch, which I continue to wear as my everyday watch. Every two to four years, when my Accutron is out of service for battery, etc., I take the Longines out of storage, wind it up, and off it goes. It continues to be in good running order after all these years.
In retrospect, I do not know why I selected to buy the Longines watch. Perhaps it was all the money I had, perhaps it was the only watch the store had in stock in my price range, perhaps it was the recommendation of the salesman, or perhaps it was because the watch came in a nice presentation box. Evidently, it was a good choice, because it has served me well over the past 70 years.