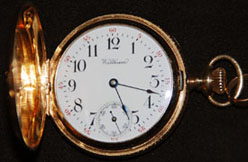 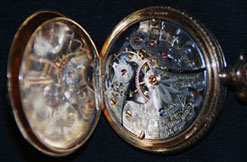 Larry Cooper (AZ)
My first one was a pocket watch.
One day at work I smashed yet another wristwatch and started to think about a solution. I didn’t like using my cell phone for telling the time, because the clock function was only on the home screen, a screen I was seldom on. One day it dawned on me that a pocket watch was the solution.
I went online to do some research and soon found that modern pocket watches were junk. One search, however, turned up an antique Waltham that was wonderful but out of my price range.
The next weekend my wife and I were shopping and were near a one-man jewelry shop that we used for jewelry repair; on a whim, I turned in.
We asked the owner if he had any pocket watches, and he replied by walking to the back of the store,  retrieving a tray, and sauntering to the counter to present us with an array of watches.
As we looked at the watches I suddenly realized we had no idea what we were looking at, but it was soon apparent, even to me, that all he had were women’s watches. One of them was a magnificent Waltham Riverside. My wife was in love. We asked the price and he waxed poetically about how it was a 14K gold case, 17 jewels, and was very rare for a women’s watch. He was asking $350, and this was more than I wanted to spend, so I said we would think about it and we started for the door.
As my hand touched the knob, the jeweler shouted “$300.” I turned to my wife and whispered, “The gold alone is worth more than that.” We reentered the shop and bought the watch.
When we got home I went to the Internet and was amazed at what I found. The watch was made in 1879 and was a very good buy at $300. At today’s gold prices, it was a fantastic bargain.
A few weeks later, I saw an ad in the paper for an NAWCC Regional (whatever that was) the following weekend. We soon found ourselves at the public-day festivities. It was at one table that I finally found my first pocket watch, another Waltham, but this time an 18-size, coin-silver cased, manly man’s beauty made in 1904. I paid $100 and was on my way, with a very heavy “turnip” in my pocket.
We wandered the show and talked to many people who told us many things about the clocks and watches they were selling. I decided to attend the next local chapter meeting, even though my wife was busy that weekend. I was hooked at the first meeting.
Our first clock, a hand-painted Kundo Anniversary clock, was discovered in an “antique” store while on vacation in Washington State. I saw it in a locked case and glanced at it, but walked on by, because I was looking for a pocket watch to add to my collection, not a clock. Besides, it looked expensive and I couldn’t see the price tag.
My wife, who was 20 feet behind me, saw the clock and quickly caught up to me to ask if I had seen it. We decided to ask the shop owner what he was asking for the clock. He opened the cabinet and saw no price, so he asked if $40 was OK. The clock was like new; we didn’t know what it was worth, but it sounded reasonable, so we bought it. When we got it back to where we were staying, we tried it out and it ran. The next day we had it shipped home, and it has been running in our living room ever since.
We have been members of NAWCC for over two years, have never missed a meeting, and own over 300 timepieces. Only 30 of them are pocket watches.
When the clock bug finally bit us, he bit hard, and now our home looks like a clock museum.

Gerald Rogers (MI)
Early in the spring of 1959 an old farmer friend came into my store in the small community of Hart, MI. He had a large box in his arms. There were a lot of pieces of clock parts in the box. He said I could have them if I wanted them because he had cleaned his barn and found these parts under the hay. Even though I had only been repairing watches and clocks for a short time (I was only 20 years old) I thanked him and put the box on a shelf. A few weeks went by and I thought I would look at what was in the box.
It looked like a nice walnut case with an eight-day Ansonia movement with alarm. You couldn’t take a clock apart like this even if you wanted to.
It was covered with hay and dirt, and I think chickens, and pigeons lived in the barn, also. Anyway, I started to clean it up and glue it back together. Lo and behold all the parts were there and nothing was broken. The glass in the door was good and original. The side mirrors were not broken and the finials were there. After I degreased and oiled the clock, not knowing what I was doing, I put it together. I am sure I did it incorrectly, but, it ran very well. I then used Deft for the finish and it looked good, too.
After joining the NAWCC in 1964, I did learn that it was a Captain John Smith and Pocahontas clock. I thought that there were two items missing from the sides of the mirrors because there were two round platforms with a hole in each. One year later (the next spring) my farmer friend came into the store with a small statue in his hand, covered in mud. He said he had been cleaning the barn and found it, and it was probably part of the clock he gave me. I said, “I think so”—I cleaned it up, and it was a cupid and it did go on the side of my clock, but he only found one. Oh well, at least I know what goes on the sides of the clock.
I have been looking for 50 years for one original cupid. I have only seen reproductions. The cupids were to symbolize the love between Pocahontas and Captain John Smith. I guess my clock has only one-half of the love. 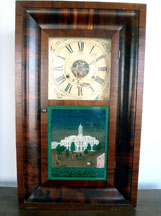 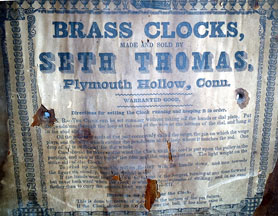 Thomas Barrett (OH)
For some time now I have greatly enjoyed reading “The First One” articles in the Watch & Clock Bulletin. Since most of us were not born with watch or clock collections, there had to have been something that prompted us to start collecting. A group of us were sitting around the hotel lobby at the 2009 National Convention and someone asked “what was your first . . . ?” That started a very interesting conversation about just what it was that got each of us started in this great hobby. After a bit of reflection, I had to share my story about the one that started it all.
I was a high school student in the mid-1960s when my great aunt called and asked if one of us would like to have this old clock that was up in her attic. She said that it was from the old Barrett family farm in Chesterville, Ontario, and had sat on a shelf in the kitchen of the old farmhouse from her grandparents’ day.
Since my great aunt was born in 1900, this clock went way back. I immediately remembered seeing the clock in the old farmhouse kitchen as a very young child and let on to the rest of the family that I would like to have it and that I was sure that I could fix it up. At that time, I had never even laid eyes on a clock movement, but when you are 15, you think you can do anything. My father drove my brother and me to my aunt’s home, and we picked up this sorry looking treasure. It turned out to be a very well worn Seth Thomas 30-hour OG, complete with black crusty finish, peeling veneer, and a missing hand. Not exactly something that would inspire one to start a horological career, but it was free and reeking with family history. I use the word “reeking” both figuratively and literally. Another aunt recalled that as long as she could remember, my great grandfather had kept a block of limburger cheese on the top of the clock. An odd place to store some smelly cheese, but it provided much entertainment to my aunt and her little playmates who would climb up on a chair, take the cheese down and smell it and make strange faces and rude comments. Kids haven’t changed much since 1910. I can imagine my own kids doing the same thing. There is still an oily stain on top of the case.
There I was, the proud steward of this family heirloom, and I immediately wanted to make it run. My brother and I removed the dial and movement, cleaned it up, liberally oiled it with 3-in-1 oil, and restrung the weights. Then a problem came up. We couldn’t figure out where to hang the pendulum bob. That little brass wire that hung down from the center of the movement with the loop on the bottom seemed to be the only place the bob belonged, but it kept falling off and the clock would only run a few ticks. Because I had never seen a clock movement before, I didn’t realize it was missing its suspension spring.
This treasure sat on the shelf for another year until I met a man who collected clocks. I described my problem, and he suggested I was missing the suspension spring. He described what it looked like but didn’t mention where I could find one. Since I had more ambition than knowledge, I took some coat hanger wire and beat the end flat with a hammer, bent a hook on the bottom, and installed it. It still wouldn’t work.
Now I was more determined than ever to get this thing running. There was an old clock shop in downtown Cleveland called Hoag’s Clock Shop. Because I was a high school student, my pass would let me take the bus to the downtown Cleveland public square for 12½ cents. I swallowed my pride, and took the trip to Cleveland, walked six blocks to Hoag’s, and presented the man behind the counter with my attempt at a suspension spring. He looked at my effort, smiled, and disappeared into the back room. He returned with a proper suspension spring and charged me 14 cents, tax included. An additional 12½ cents got me a bus ride back home. Now I was ready for some real clock repairing. Once home, I bent a hook on the bottom of the spring, installed it, and it worked! The clock did need one side of the case propped up with a pack of matches to keep it going, but it ran. It was years before I learned how to adjust the beat, but I was proud of my accomplishment.
It’s been over 40 years now, and the clock is still running on its 14 cent (tax included) suspension spring. People often ask what is the most valuable clock in my collection. Without hesitation I point to my humble Seth Thomas OG—the clock that started it all.