Patricia Holloway (TX)
My husband Jay and I have been collecting clocks for many years, beginning with a Ridgeway floor clock as our first major purchase very soon after we were married in 1975. As you might expect, as young newlyweds, we heard comments ranging from, “You bought WHAT?” to “You don’t even have a washer and dryer or a spare bed for guests, and you bought a clock?” Although we weren’t deterred by these comments, it was about four years before our next purchase. This time, we fell in love with two simple Gustav Beckers at an antiques store in Arkansas. Because we couldn’t make up our minds which one we liked better, we ended up with both of them! Then, as happens with many collectors, children and work came along, causing a hiatus in our collecting. We still own and enjoy these three clocks, along with others added later, but aside from the clocks, “the first one” that really launched me into new realms of collecting and research was the purchase of a single decorative watch key.
It all started several years ago, while on a girls’ antiquing trip in the Chicago area. Sometime during this trip my sister purchased a small ladies’ watch with a single hand. She was curious about the reason for only one hand; had the other hand been lost along the way or was it designed with just one? As a new NAWCC member, I assured her that I’d be able to find someone who could shed some light on this subject. Being a “clock person,” and obviously knowing nothing about watches, at the next Regional we attended, I asked a “watch person” about this phenomenon. Once he finished snickering behind his hand, he kindly explained that if we had a watch that was meant to have only one hand, it was probably much older, larger, and much more expensive than what I was describing.
Undaunted, I decided that I was going to learn more about watches and set off around the mart room, looking at all the watches and asking questions. I soon came upon a table with a watch display as well as a small case with watch chains and what appeared to be a number of interesting charms. Asking if I could look at the items, the owner gladly took them out one at a time and explained each one to me. You guessed it—these interesting charms turned out to be keys. The door had been opened and I was embarking on a journey into the world of watch keys. Of course, having crossed the threshold, the next step was actually purchasing one of these wondrous pieces of history.
I carefully selected a decorative trumpet-shaped key with a black-and-white striped stone, tucked it in my purse, and continued my trek around the room in search of watches.  Amazingly, I found other fascinating items on watch tables—watches (of course), chains of all types, fobs, watch holders, case openers, movement tins, advertising, trade cards, and… I was hooked! I’m definitely still a novice, but I’ve found some really fun items to keep that “first one” company and have met many wonderful people who are willing to share their knowledge. As this journey continues, it seems I learn something new almost every day, and who knows what I’ll find next! 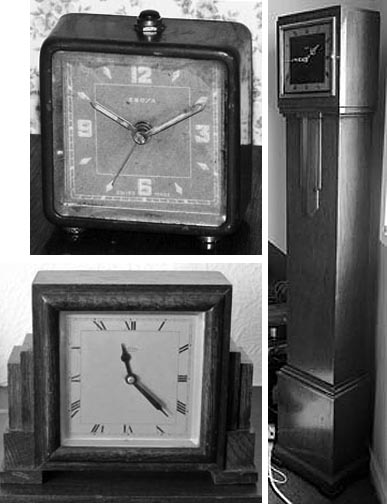 Les Pook  (England)
The first one was an Ebosa 30-hour alarm clock, a sixteenth birthday present from my parents (Figure 1). This woke me up reliably until several years later when it stopped working. By this time I had rebuilt two motorcycle engines, so it seemed to me that I ought to be able to repair the Ebosa, rather than taking it to a clockmaker. I took it apart and found that a tooth had broken off one of the pinions. This is a fault that I have not come across again. I took the pinion, still on its arbor together with a wheel, to Clerkenwell, the clockmaking area of London, where I found a friendly dealer who sold me a replacement. After reassembly, the clock worked and was used for several more years, until wear made it unreliable. It was replaced by a Westclox synchronous alarm clock.
Living with my parents and later in lodgings didn’t leave much scope for collecting, but my experience with the Ebosa and some other balance wheel clocks had convinced me that collecting clocks was practical because I could do my own clock servicing and repairs. Soon after we were married in 1960, and nine years after the first one, my wife and I bought an eighteenth-century long-case clock by John Barrow, London, for £9 10/- ($38). My confidence in my clockmaking abilities was not misplaced, and the clock is still running and keeping good time. Encouraged by my wife, I bought more pendulum and balance wheel clocks.
At a relative’s house I had seen a Selectra synchronous electric mantel clock that I liked. Coincidentally, an identical clock turned up at the Summer Fayre held at my son’s school in 1983. I bought the clock for 50 pence ($1) (Figure 2). It was not in working order, but I managed to get it going. Further synchronous clocks followed. Prices have gone up, but interesting examples can still be obtained for modest sums. Current electrical regulations mean that professional clockmakers are reluctant to repair synchronous clocks. In fact, provided that they have not been mistreated, synchronous clocks are usually reliable and quite easy to maintain. Cleaning and oiling are often all that is needed to get a reluctant clock to run. Synchronous movements, probably removed from clocks that have been converted to quartz, are sometimes listed on eBay. This is a useful source of spares that are otherwise unobtainable.
Six decades after the first one, my hobby has progressed to a point where I have a popular website, www.pook.org.uk, which includes an extensive section on synchronous clocks, and my home office clock is a Smith synchronous granddaughter clock made circa 1935 (Figure 3). The advent of digital photography has made servicing an unfamiliar clock that has no instructions with it much easier because photographs can be taken as a guide to reassembly.