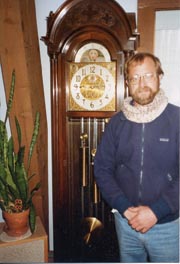 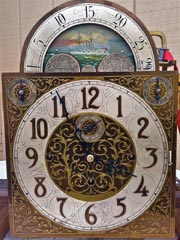 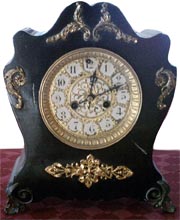 Chris Beattie (NY)
I grew up in a very large family and the center of the family revolved around my grandparents. I have nine aunts and uncles and over 50 first cousins. When I was a child there was routinely between 10 and 15 grandkids at Grandpa’s house on a Sunday afternoon for dinner. The three things that remind me the most of Grandpa (outside of his family of course!) were the New York Yankees, Notre Dame Football, and his Brewster & Ingrahams steeple clock with a frosted lower tablet of a hot air balloon. When it was time to wind the clock, Grandpa would make a big deal out of it and all us grandkids would sit while he chose one grandchild that he thought was behaving the best that day. It was the best behaved youngster in Grandpas eyes that got to wind the clock that Sunday, while everyone else watched and wished that it was he or she that had been chosen. This family-centered clock ritual is one that I will remember forever. I have to admit that I did not get to wind the clock too often, but when I did it was fantastic!
Several years later when I was an adult in my mid-twenties I saw a clock at a garage sale and inquired about it. It was a Waterbury, enameled wood, black mantel clock, with a partial label on the back that read “PARLOR SPECIAL.” I asked the gentleman if the clock worked and he said that he thought it did but he had not wound it in some time. I opened the back and pretended to know what I was looking for and everything looked normal to the untrained eye. I flicked the strike hammer up and listened to how it gonged. It immediately reminded me of my then-deceased grandfather and the ritual of who got to wind it while Grandpa approvingly watched over your shoulder as the key turned; click, click, click… I asked the gentleman how much he wanted for the old clock and he said $25. SOLD!
When I returned home with my new treasure and all my thoughts running through my head, I placed the pendulum bob on the hook, wound it, and tried to start the clock. It ran for only a few seconds and stopped. I tried several times to get it running but to no avail. I looked in the phonebook for a clock repair person, and because we lived in a small town, there was only one listed. I called the business and spoke to an elderly man who seemed upset that I would even bother him with such a trivial question about my non-running clock. I asked him if I dropped the clock off if he could take a look at it and tell me how much it might cost to get it running again. The old curmudgeon told me that he was way too busy to help me and that I should call back in six months when it was more convenient for him and he would THEN put me on a waiting list. I was more than a little upset but politely said “ok, I will call back in six months.” By the time I hung up the phone, I was steaming mad because of his attitude toward a potential customer. Over the next few days I searched the Internet to see if I could find a potential remedy for my non-running clock, and I was still just as mad. What I did find were many repair books and DVD programs, which I slowly ordered and used to teach myself the trade of clock repair. Then I began to order some tools that I would need to fix this clock myself. I thought to myself “I’ll show you about being rude to a potential paying customer!” I bought a downtrodden, 30-hour, shelf clock to “tear apart,” and I set out to teach myself about repairing an antique clock. Needless to say that I did fix it as well as my Waterbury “PARLOR SPECIAL.” Several years after that, I was also “allowed” to fix Grandpa’s Brewster & Ingrahams steeple clock by my grandmother, who is today in her late 80s. That was nearly 15 years ago and since then I have started my own part-time antique clock repair business. As for the old curmudgeon, I never called him back after six months, but I met him at an auction a few years ago when we were both bidding on the same clocks. He approached me and said “Hi, my name is so and so and I was just wondering what you are going to do with all those broken clocks”? I explained to the old curmudgeon that I was buying the clocks to repair and sell. He asked me where I was from and I told him that I was from the same town as he and I began to repair clocks several years ago when I called him for help and he was rude to me and told me to call back in six months to be put on his waiting list. That ended that conversation.
My Waterbury “Parlor Special” is still part of my collection. Every now and then when I face a challenging repair, I will look at my first clock, remember everything it has meant to me, and get the confidence to forge ahead. From the fond family memories; to the curmudgeon who sparked my desire to repair clocks; to my passion for antique clocks; that Waterbury “PARLOR SPECIAL” is a special part of my life that I am grateful for.  Although my first clock is not one of the most valuable clocks in my collection, it has a special place in my life and  a great story to go with it!