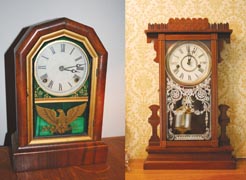 Rev. Daniel Schroeder (CT)
The tale of my first clock is actually a tale of two clocks. As a young teen I discovered an Ansonia shelf clock wrapped in a pillowcase in my grandparents’ attic. The clock was in terrible condition, and yet I fell in love with it. After my grandfather’s death I asked for and received the clock and began to restore it. It was my luck that as a rank amateur I found the only damage to the movement was a broken pendulum spring. The finish on the case was shot, the upper glass was broken, and the paint had peeled almost completely from the bottom glass.
Once I had the Ansonia “restored” and running, I asked my father where it had come from. He could remember nothing of the clock. In fact, the only antique clock that he could recall was a kitchen clock in his grandparents’ house. He knew that a great aunt had taken possession of that clock. After her death (she had no children), my parents acquired the kitchen clock. It was a walnut Waterbury with a oneday movement. I opened the clock up and found an Ansonia key. A little investigation showed that the key that I found in the Ansonia shelf clock was indeed a Waterbury!
With more experience by this time, I restored the Waterbury much more faithfully by having a friend duplicate the screen-printed design from the broken door glass, carefully reproducing three pieces of trim that had been lost, and replacing a chewed click wheel and click.
When I pressed my father on the possibility that the two clocks had been in the same home, he suddenly recalled a clock in the parlor of his grandparents’ house. He could remember little of that clock because children were not allowed in the parlor. Indeed both clocks had belonged to my great-grandparents. At this time the Ansonia remains with me while my parents keep the Waterbury running in their home.

Rich Mitchell (MD)
Just a year ago I bought my first clock. Prior to that purchase my love for auctions had filled my garage with lawn mowers, trimmers, and bicycles, and a wall of my house was covered with shelves holding ancient tube radios. I was in a Denver antiques mall on my way back from Vail when I saw the Schatz London Coach 400-day clock. The tag said it worked, so I picked it up along with an RCA cathedral radio.
When I got home to Maryland, I set up the Schatz, but it wouldn’t run. The pendulum wouldn’t even move. After figuring out how the locking mechanism worked, I got it to run, but not for more than a few minutes. Time to hit the Internet. I ordered a kit that allegedly would help service a 400-day clock. But the more I read, the more I wondered if a 400-day clock could even run in my old house with all its vibrations. So the servicing of the clock went on hold.
Meanwhile, my auction action now had a purpose. I was looking for clocks and maybe a key-wind pocket watch or two. Anniversary clocks could be had for ten bucks or so, and my collection began to grow. Hey, you could get a glass-domed quartz anniversary for a buck, use the dome for one of the mechanicals, and throw the rest away.
At the auctions I ran into Gary and Paul, who were also looking for clocks. They told me about this organization called the NAWCC, headquartered in Columbia, PA, 45 minutes from my house. Can you imagine that? Here I was near ground zero for clock collecting in the United States. But wait, there’s more! They were going to have their National Convention in York, about half an hour from my house.
So I began attending weekend courses for beginners in Columbia on both clocks and watches. I remember being asked what kind of clocks I was interested in. My response was, “Well, I have all these anniversary clocks.”
June found me attending F101 at the National Convention. Now I could at least clean a clock and bush it. Because of the Schatz and the other 400-day clocks that the auctions had been providing, I figured I’d better attend the Chapter 168 meeting. There I learned about fancier and older anniversary clocks. So I signed up for the “Torsion Times” and soon was enrolled in the September F105, the 400-day clock class.
Through the summer the 400-day clocks just sat on the shelf as I worked on 8-day time and strikes. Then came September, a trip to Houston, and the 400-day class. There I came to understand that the hardest part of servicing a 400-day clock is polishing the brass and that a little bit of overswing will overcome a lot of vibration. So now the London Coach clock, along with several other Schatz clocks, are merrily swinging away in my rickety old house.

Robert Lawrence (NE)
My wife was her paternal grandfather’s favored granddaughter. We were still engaged when he asked us to “stand up with them” at his second marriage. He was getting a jewel for a wife, both of them then elderly. We consented to be their witnesses, and they settled into her lovely home not too far from where my wife and I first lived. We would visit them often and always had a delightful time.
During these visits I noticed the Ansonia Monarch clock that he had bought and kept going all those years. Every few years the works were given a kerosene bath. I suppose I must have often complimented the clock, but can’t say for sure about that. At any rate, he must have noticed my fondness for it.
Less than two years later my wife and I moved from Ohio to Wisconsin where I attended the University of Madison. Not long after this we got word that Ruth’s grandfather had throat cancer. He underwent treatment at Columbus, OH, but only lived a few months afterwards. My wife and I went down for the funeral. It must have been in the early days of radiation because his wife Molly said to me, “Bob, they just burned him up.”
After the funeral, Molly said to us, “Come on over to the house if you have a little time.” As soon as we got there she led us into the formal dining room and there sat the Monarch on the table. Molly pointed to it and said to me, “Mr. Turner wanted you to have the clock.” Almost overcome with emotion, I thanked her and assured her it would be treasured as long as I lived.
Grandfather Turner would often accompany me on little jaunts to visit church folk in my old 1937 Plymouth. We had good conversations. He always disembarked with, “Thanks for the buggy ride!”
The Monarch has made its home with us in Wisconsin, Texas, Massachusetts, and now for 42 years in Nebraska. I’ve told the story countless times and never tire of it.