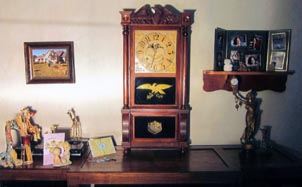 Birge Mallory Clock Company clock.
An Illinois Member
In 1835 my great-great-grandfather Nathaniel and his wife Hanna, who lived in Bridgeton, NJ, decided to move to frontier country. They loaded up their covered wagon pulled by a team of oxen and, along with their eight children, headed west. A couple of years were spent in the area of College Corner, OH. They then moved to Mount Carmel, IN.
When the older boys were young men, one of them, George, fell in love with a young lady who lived on the other side of a small creek called Paddy’s Run. The rest of the family moved out west, finally settling in Putnam County, IL, where cousins had preceded them. George stayed in Mount Carmel, built a 20-square-foot dirt-floor log cabin and married his love, Sarah, in 1848.
Their first four children were born in the log cabin. The second child, Ellmore, was my grandfather. The family moved on to Acton, IN. While there, what my grandfather called “The Great War of the Rebellion” began and ended. Great-Grandfather George went off to serve as a Union soldier in places with strange-sounding names: Lookout Mountain, Chickamauga, and Dalton. He arrived home one day unannounced, opened the cabin door, and walked in. Grandfather called it the happiest day he ever knew. Great-Grandfather had contracted malaria while in the South and was never again able to put in a full day’s work. The family decided to move to Illinois to be closer to family. They came by train to Tomica, IL, where they were met by family and taken to the new home that Great-Great-Grandfather had built during the Civil War. They lived there one year and while there, their last child, Dick Rufus, was born. There was 17 years’ difference between the oldest and the youngest.
The old original house was still standing. My grandfather, then 15 years old, decided to explore the old house and while there discovered a clock. He asked his grandfather about the clock and was told it no longer ran, if he wanted it he could have it, and that they had the clock when they came to Illinois in 1843.
Now, skip forward to 1965. My father told me that in a box out in the barn there was a clock that Great-Great-Grandfather had when he came to Illinois in 1843, and he thought I should have it. We went into the barn and found this ratty-looking clock and I took it home.
I was remodeling our home at the time, so it was 1968 before I looked at the clock. All the veneer was gone from the full rounded pillars and some was gone from the lower sides. The pendulum was inside, but there was no apparent place to hang it. The three pieces of glass for the door were missing, but there was a label pasted on the inside back. I dusted it off and saw that it was for a Patent Brass Eight Day Clock made by the Birge Mallory Clock Company of Bristol, CT. Much later research showed this company was in business from 1838 to 1843, so it must have been bought after the family left Bridgeton, NJ, perhaps when they were in Ohio for a few years.
I cleaned the case and applied new veneer where needed, having had some experience in that kind of work. I installed plain glass in the three-tiered door, but the movement baffled me. A man who had a clock repair reputation cleaned the movement and hung the weights on cords to put in a new suspension spring. He had it running and had put new hands on to replace the missing ones. He said the strike spring was so rusty he feared it would break if he tried to straighten it out. I brought the clock home and inspected the spring and cleaned off the rust. It did not look so bad, so I gently pulled it into position and it has struck ever since. The bill I received for the clock repair was $9.20. I located a lady who did reverse painting on glass and she painted the glass and charged me $15.
Several years later while wandering through the old state capitol building in Springfield, IL, much to my surprise, there on a shelf sat a clock just like mine, but it had a carving of an eagle on top. I came home and finally found a picture of a Birge Mallory, and with that as a guide I made a top.
Years later, when I read my grandfather’s 1,000-page diary I came across the following:
Sept. 30, 1931: Started to get mail and met Theo and James at the road gate.
Oct. 1, 1931: Theo and James went to Genier. I got out the old clock that once belonged to my grandfather Whitaker and I believe was brot from New Jersey when they left Bridgeton in 1835. I gave it to Ray and Theo took it along when they started home at 10 a.m.
Theo was my mother, and Ray my father, and I am James, who was three years old at the time.
I have repaired clocks since 1965 and accumulated a few, but there is nothing like Old Nathaniel’s clock. 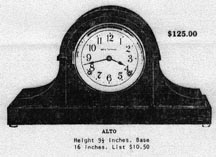 A catalog drawing of a Seth Thomas Alto clock similar to the one restored by John Crowley.
John M. Crowley (CA)
My first full-time job was with Pacific Telephone and Telegraph Company in 1969, and my first supervisor was Dick Pridham, our instructor at Station Installation School. One afternoon I returned to the classroom early from lunch and encountered Dick busy at his desk working on a piece of metal that had nothing to do with the telephones we were learning about. I asked what he was working on and he told me he was polishing the pallets on an anchor escapement.
He further explained that he was restoring an old English bell-strike grandfather clock and that the pallets had become worn over time. Rather than going to the trouble of making a replacement escapement, he found a man who did micro welding to fill in the worn spots. He was now removing the excess metal using abrasive stones to bring the pallets back to their original surface.
Antiques had always interested me, but I knew nothing about antique clocks. After watching him work on the escapement over a few lunch breaks with lots of questions about clocks from me, he invited me to his home to see his progress in the restoration project. This was to be the beginning of a life long friendship.
After several evenings of looking over his shoulder while he performed various repairs and adjustments, I wanted to have a clock of my own to work on. Dick took me to my first NAWCC chapter meeting (Southern California Chapter 4), and I joined the Association in July 1971. At the July meeting mart I purchased a Seth Thomas “Alto” adamantine camelback mantel clock for $65. Dick inspected it and agreed to mentor me through my first repair experience.
The project took a few months to complete, as I was learning clock repair from “the ground up.” Disassembly, cleaning, reassembly, assessment, disassembly, repairs, reassembly, inspection, disassembly, final cleaning, reassembly, oiling, and adjusting—learning to use Dick’s lathe, it took 15 hours to fabricate and put in place a bushing for the center wheel arbor of the strike train. Finally, after polishing pivots, new bushings where necessary, replacing main springs and applying oil to the oiling points, the clock was keeping time and chiming the hour and half hour.
The clock is still with me although I lost my friend of 40 years in July 2009. The clock needs a good cleaning and oiling and, no doubt, a few repairs and adjustments. Although, for now at least, its stilled hands and silence remind me of more than the time at hand.
Many thanks to Richard B. Pridham, NAWCC No. 19211, for taking his time to mentor me.