﻿
Since 1997 the NAWCC has adopted a publication model that includes advertising and accepting orders for books prior to their publication. Advertising is placed in one or two issues of the NAWCC MART as well as other venues. The total number of books produced is dependent upon the number of books that are pre-ordered. The following books have been produced as NAWCC special order publications; each book front cover image is followed by a description of the book and a brief summary of its contents.


Books available for purchase are noted as such below the book's image in this list.
The Library and Research Center has lending copies of many books available to NAWCC members.
Check availability in their Online Library Catalog or
the Lending Library book list.

Order this publication from the NAWCC Store.
Philip T. Priestley, Aaron Lufkin Dennison, An Industrial Pioneer and his Legacy.
8.5” x 11”, perfect bound, 156 pages.
This book on Aaron Lufkin Dennison, one of the co-founders of the American Watch Company of Waltham, fills a gap in the extensive horological literature. This is the first time a work has been entirely devoted to his life and successor companies. The book has 156 pages and over 200 illustrations, covers Aaron's early career as a watchmaker and parts supplier, his subsequent management role in the manufacture of watches at Roxbury and Waltham, his later watch manufacturing concern in Zurich, and his final career as a watch case manufacturer in England. 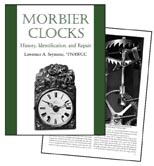 At last! A definitive reference on the history, identification, production, and repair of those ubiquitous and fascinating French Morbier clocks from France’s Haut-Jura area. This reprint from the 1970s NAWCC Bulletin articles consolidates “Alan” Seymour’s expert research and knowledge that started in 1965 with his first flea market find. The book is handsomely illustrated with over 100 detailed photos and drawings that will surely assist you in enjoying your Morbier clock. The consolidated information will be especially valuable to the collector with their first Morbier clock.
–Bob Reichel

For a closer look at this book – see sample book pages below
Table of Contents
What is a Morbier?
The Time Train
Striking Trains
Restoration and Repair

The years of work Howard Lasser invested in this project have resulted in the most complete Hamilton serial number list compiled to date. Considerable effort has also gone into putting the list into a compact, easy to use format. This combination of information and format will prove invaluable to collectors, dealers, and researchers of Hamilton watches. —Rhett Lucke

Katra incorporated his previously published study Clockmakers and Clockmaking in Southern Maine with those in Central and “Down East” Maine to provide in this volume a fairly extensive documentation of clocks and timepieces produced in the entire state between 1770 and 1900.

Because of the rural character of Maine, clockmaking in Maine did not produce famous makers that equaled the stature of those in Massachusetts and Connecticut. Maine makers were confined to small and scattered geographic areas, and they relied on handcraft methods to make their clocks.

Katra divides his study into four areas: the Portland area, the Quaker iron plate makers, central Maine, and “Down East” Maine. He discusses thoroughly the history of each maker and provides numerous photos to show examples of the clocks and movements they made.

Ed LaFond in the preface states, “The clocks in this book were produced in Pennsylvania by clockmakers trained in the traditional way. They were not produced in batches of 1,000, nor 100s, or even 10s. They were not made with even remotely interchangeable parts … probably the most prolific makers produced less than 100 shelf clocks.

“We have divided the book into two basic categories: the weight-driven shelf clock and the spring-powered bracket clock. The origins, areas of manufacture, and regional variations of each group are discussed. Information about individual makers is also presented.”

Based on the proceedings of the 23rd Annual NAWCC Seminar, the volume covers four parts: Setting the Stage, Technology and Social Organization of the Early American Industry, Articulation and Diversification of the Industry, and the Impact of the American Watchmaking Industry.

America’s most important legacy was the development of efficient mass production methods to make watches. The Willards—Aaron and Simon—taught Luther Goddard their means of totally independent craft and business. Goddard became the most prolific early American watchmaker. The community in Roxbury and Washington Street in Boston in the mid-1800s attracted ambitious horologists such as Jubal Howe, Aaron Dennison, Nelson Stratton, and Edward Howard. The last legacy of Simon and Aaron Willard was the Boston Watch Co., which used automated machinery to turn out interchangeable parts for watches on a large scale. The authors also discuss thoroughly Royal Robbins and Charles Vander Woerd, outstanding contributors to the development of the watchmaking industry in Boston in the mid-nineteenth century.

Clint B. Geller, A Study of E. Howard & Co. Watchmaking Innovations 1858-1875 (NAWCC Special Order Supplement No. 6, 2005). 8-1/2" x 11", 90 pages, and many black and white photos and several tables.
Divided into two parts, Geller covers thoroughly in part I the origin and evolution of the E. Howard Co. divided-plate and key wind movement and in part II the three-quarter watch movement. This company’s early watches exhibit greater individual character, on the whole, than those of any other American watch manufacturer. Because Howard was willing to employ skilled labor and encourage technical development, among other reasons, around 1860 his watches were state of the art.
The origin of Howard’s divided-plate movements has been traced to the Boston Watch Company. The earliest Howard watches incorporated two important features necessary for a good watch with no fusee—stop works and protection mechanisms for the wheel train. But with no fusees there were other problems, as Geller details.

In part II Geller presents new technical data and accurate introduction dates for the various movement models based on factory records and research updates. As more efficient mass production methods began to deliver moderately priced watches with enough accuracy for the ordinary citizen, the E. Howard Company failed to adapt quickly enough to the new trends, and soon their products were considered old-fashioned and eventually obsolete, causing the demise of the company.

Ron Price, Origins of the Waltham Model 57, Evolution of the First Successful Industrialized Watch (NAWCC Special Order Supplement No. 7, 2005). 8-1/2" x 11", 164 pages, many black and white photos and many tables.

Aaron Dennison and Edward Howard collaborated in 1849 to make interchangeable parts for watches on a large scale. The American Horologe Company was established in 1850; the company name changed to the Warren Manufacturing Company (officers from the beginning called this company the Boston Watch Company), and in January 1851 the first watch factory in America was completed. Dennison traveled to England during the construction to learn how to perfect the business, especially the processes of frosting and gilding movement parts, dial making, and fabricating hairsprings and mainsprings.

A sequence of events led to the establishment in Waltham, MA, of the Waltham Improvement Company, which allocated part of its landholdings to build a watch factory on their newly acquired property, which opened in 1854.

By 1856 the company and the country were facing hard times. The author traces the changes in owners, in the company names, and in the watches produced, including Model 57 with its unique and popular design. Model 57 watches were so successful that foreign manufacturers began to copy them. Price compares and illustrates two good fake Model 57s, a Wm. Ellery and an AT&Co.

G. Russell Oechsle, Helen Boyce, and Collaborators, An Empire in Time: Clocks and Clockmakers of Upstate New York. 8-3/4" x 11-1/2" hardcover with dust jacket, 185 pages, and more than 350 black and white photos with some in color.

Alphabetized and indexed, this book is a user-friendly source to find quickly the clockmakers, casemakers, inventors, and merchandisers who worked in central and western New York State in the eighteenth, nineteenth, and twentieth centuries. The authors include more than 150 makers or merchandisers along with historical information about each entry.

Historically, New York clockmaking was considered an offshoot of the Connecticut clock industry. An Empire in Time documents the number and the breadth of activities of makers and merchandisers in upstate New York. These makers independently invented the first commercial perpetual calendar clocks, the first time recording clocks, unique tallcase and tower clocks, and many early electric and battery clocks, to name a few.

The author covers the 90 years of the so-called Golden Age of clock- and watchmaking, beginning with 1631 when the Clockmakers’ Company was incorporated. Despite frequent wars, pestilence, natural disasters, and changes in the head of state with the waxing and waning of the spending power of the aristocracy and Court, the watch and clock trade grew rapidly during the last two decades of the seventeenth century. The term box referred to the inner part of the watch movement where it was hinged; the outer part was called the case. Four kinds of case materials were used: gold or silver, which was the most expensive; fire-gilded brass alloys; animal or fish skins (e.g., shark); and tortoiseshell, which was the most attractive, coming from the belly shell of a hawksbill turtle and inlaid with gold of silver wire and foil.

Priestley provides a biographical dictionary of the box and case makers and detailed tables of the punch marks that each used.

Frederick Shelley, Early American Tower Clocks (NAWCC Special Order Supplement No. 2, 1999). 8-1/2" x 11" hardcover with slip case, 236 pages, over 250 illustrations, with a glossary and an index.
All tower clocks are public clocks. The golden age of American tower clock craftsmanship was from 1726 to 1870. Early tower clocks were large, crude, expensive, and accurate only to the nearest hour; typically, their only decorative elements are the gilt hands that are exposed to view, with none of the furniture or jewelry associated with domestic clocks and watches.

In Part One Shelley details chronologically the surviving tower clocks and their makers. Part Two lists alphabetically by name all known makers, dealers, and other persons associated with American tower clocks from 1660 to 1998.

The pocket watch collector will find this volume to be a usable and accurate guide to all known-grade listings, Private Label, or Jeweler’s Contract watches of the Hampden Watch Co. The book also lists over 11,000 known Serial Numbers, is indexed, and has numerous descriptions and photos.