NAWCC's mission is to educate the world in the art and science of timekeeping.

NAWCC's vision is to be the premier educator in timekeeping and the preservation of timepieces.

The NAWCC is a wide-ranging organization with members in the USA and 50 other countries. Members participate in over 150 local and special interest chapters in North America, Europe, Asia and Australia. The NAWCC operates the National Watch and Clock Museum, the Library and Research Center, and an extensive publishing program. The NAWCC also sponsors an annual convention, a symposium, and its chapters host a number of regional meetings.

In 1943, L.D. Stallcup was a Certified Master Horologist living in Nashville, Tennessee. He collected odd movements, and felt that watch collectors should get acquainted to exchange ideas and trade duplicates. Robert Franks was a Philadelphian, so hungry for horological news and association that he would travel to New York City to attend meetings of the Horological Society of New York. Henry B. Fried also was in that group. Others also came - there was no other such place where kindred souls might meet - Jack Fuchs, Professor Willis Milham, Jean Roehnch, and Dr. Karl Vogel were regular members. Cultural and antiquarian horology was Robert Franks' chief concern. With L.D. Stallcup and another Tennessean, L.E. Coleman, they mailed one hundred copies of a Watch Collectors' Club prospectus. These five typed pages were later considered BULLETIN # 1. Forty-three persons responded and enrolled in this new organization. Requests to include clocks resulted in a name change. The National Association of Watch and Clock Collectors was used in BULLETIN # 2, dated November 8, 1943. National officers were elected. The Philadelphia Watchmakers' Guild became Chapter # 1, as it had been founded prior to NAWCC. The first Annual Meeting (later to become the Annual Convention) was held in Philadelphia on October 28, 1944. A draft of the Constitution and Bylaws was compiled.

Since 1943, this nonprofit organization has grown from 52 Charter Members to an international organization with many thousands of members. NAWCC publishes two bimonthly periodicals, the WATCH & CLOCK BULLETIN and the MART & HIGHLIGHTS.

"Why Columbia?" is the most-often asked question about the location of the Association's National Headquarters. The connection started in 1952 when Earl T. Strickler of Columbia, Pennsylvania (located 80 miles west of Philadelphia) was elected Secretary. He was organizer and caretaker of all the Association records. In 1953 he was named BULLETIN Editor. He performed his many duties in the basement of his Columbia home. As NAWCC grew, he hired employees and rented office space until 1971 (with membership nearing 12,000) when a separate building was purchased at 514 Poplar Street to be used as the Headquarters office. Prior to 1971, Mr. Strickler maintained his own private museum in his residence. In 1971 NAWCC formed a Museum Acquisitions Committee to solicit donations to purchase a more permanent accomodation for the growing collection. In 1977 doors opened to the public to an 8,000 square foot gallery. In 1985 a gallery addition doubled the existing exhibit and library space. In 1998 the Museum was again expanded with a large addition added to the building, including new office space for the staff, and the Museum collection exhibition itself was expanded to fill in the entire old building.

* Reprinted in part from the 1993 NAWCC National Convention Program 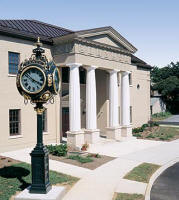 Left. The National Watch & Clock Museum
as it appears today. 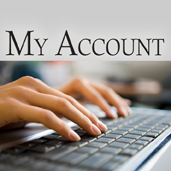 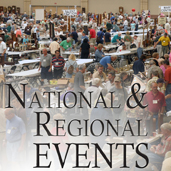 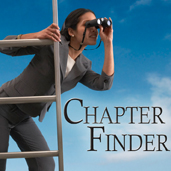